Looks like my magical unicorn inspired wishes are coming true as Robot Unicorn Attack will be out on the App Store on June 1 for just $2.99. Create your own gaming blog.

Cartoon Network’s Adult Swim has been running for over fifteen years, so it’s natural that the brand would expand beyond the role of broadcasting a late-hour block of mature cartoons and into something much bigger; a video game publisher and part-time game developer.

While Adult Swim has bankrolled the distribution of some stellar indie affairs like Jazzpunk and Völgarr the Viking, they’ve also made a name in gaming with titles they’ve developed in-house. And one of their more prominent properties is the ridiculously enchanting Robot Unicorn Attack.

The series has spawned a few light-hearted sequels, but nothing as ambitious as the newest entry to the fold, Robot Unicorn Attack Forever. The latest effort from Adult Swim Games and GetSet is an evolution of the Equestrian Droid’s wish-chasing quest in every way you could imagine, and then some — it’s just too bad that a lot of the new depth offered is a bit limited because of at times poor execution and obnoxious paywalls.

In an age where endless runners have saturated the mobile space of gaming, Robot Unicorn Attack remained engaging because it recognized the undeniably effective allure that its bizarre presentation had. The previous entries took strides to prioritize the expansion to its themes over its gameplay.

The focus of Robot Unicorn Attack Forever is different, however. Adult Swim has shifted their direction toward gameplay this time around, and has fortunately done so in a manner that doesn’t compromise the novelty that gives the Mechanical steed its appeal. For starters, there’s a lot more at stake than simply running and jumping through deceptive death-traps. The score accumulated from your performance, for instance, is now used as experience to level up the capabilities of Robot Unicorn, alongside the newest edition to the series, the Citadel.

You’ll not only earn spoils for the fabled horse, but you’ll also earn points that will level up a magic base of operations that will offer a variety of functions to your adventures.
The Citadel will periodically generate the collectible tear drop currency from RUA’s second outing, as well as other special stones that can be used in its in-game store, where purchases from its market generate back a sum of experience to the base. The more experience you earn for the base, the closer you get to leveling it up to the next tier, which will not only significantly improve the output of its resource regeneration, but will also unlock a new stage for you to endlessly roam through. However, that task is easier said than done.

While the grind to get new goods is a little more demanding than it should be, the dynamic to purchase new ‘corns for use is satisfying, if not a bit messy.

Players will get to arrange a personalized team of their own horned beauties from a roster of over 40 different galloping bots, with the caveat of having to maintain your growing collection unicorns within a limited stable space. The concept is a bit frustrating as the manner of upkeep is clunky as hell; the only way to make room for more horses is to salvage the ones you don’t want for parts. Sounds simple enough, right? 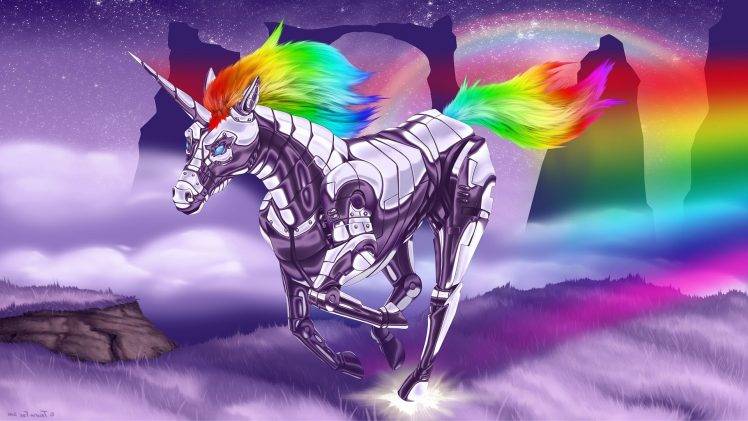 All the new horses you buy are generated randomly through a gachapon-styled lottery, and while that doesn’t sound like an issue at first, it gradually becomes one when you realize that you can only salvage the horse you don’t want if there’s an upgradable horse available. If there isn’t, then you can’t trash them. And if you can’t trash anything, you won’t be able to buy anything— which left me with killing off Unicorns that I didn’t want to sacrifice. This left me with a full stable filled with incompatible unicorns.

The only way to efficiently grow the citadel beyond the standard horseplay is to recruit more horses, so I was left with no choice but to spend real-world money to expand my stable space by two more slots. Even as we speak, I narrowly avoid that dreaded stable scenario each and every time I visit the store to buy a new steed; it’s needlessly frustrating.

Aside from the gripes that come with growing the Citadel with clumsy resource management, the other method of expanding its abilities comes from directly playing the game itself, which thankfully is the most polished version of the formula yet.

Daily language reviewwelcome to mrs. bryan's learning cafe. Every rainbow-clad trot you run through will go toward upgrading Robot Unicorn, granting the steel beast new passive perks that will vary by its level; these perks range anywhere from additional smash bonuses to percentage increases for any of the experience points or items earned. In addition to their inherent abilities, you can upgrade the fabled creatures with companion bots, new floaty helper drones (available to buy from the Citadel’s store), and stacking additional perks onto the Unicorn as they hover alongside.

The other new addition introduced in Robot Unicorn Attack Forever is raiding, which will let you assign one of the unicorns in your stable to go out on a mission that takes place asymmetrically. These happen under a range of different time frames so that you can farm extra bonuses for your stone stash.

The feature isn’t mind-blowing, but it certainly is useful in taking on some of the glut from RUAF’s demanding grind. It also gives you something that you can do with the extra pair of hooves that’re taking up residence in the Citadel’s cramped stable.

While there’s been a lot of work done to add depth to the core game, the team didn’t forget about the importance of the title’s trademark nihilism, as Robot Unicorn Attack Forever has a load of dark humor behind it. There are plenty of moments where the irreverent Lumina will dish out plenty of backhanded ribs that’ll be sure to slap a dumb smile on your face, and the bios of the different unicorns that you collected in the game’s unidex are comedy gold, almost making up for the game’s flawed system that manages them.

I never did like the phrase “you can’t beat free” because there’s one other precious commodity that’s spent with video games that you just can’t earn back, and that’s time. Robot Unicorn Attack Forever doesn’t do the best job of respecting that time, but it’s still the most enjoyable entry that the series has ever produced.
There’s plenty of fun to be found, and the sequel does deserve to be played every now and again. I would just recommend not sinking your teeth too deep into the new depth it offer, as the payoff is more groan-inducing than it is rewarding.

Review: Robot Unicorn Attack 2 is every bit ridiculous as it sounds . No longer are rainbows, sparkly dolphins, and synth-pop ballads limited to acid trips in your high school buddy's Astro Van. www.macworld.com