Dragon Ball Z: Supersonic Warriors is a fighting game developed by Arc System Works and Cavia and was released in 2004 for the Game Boy Advance and Nintendo DS by Atari in North America, Banpresito in Japan and Bandai in Europe.

The people in charge of producing this title are very well known in their respective environments. On the one hand, Arc System was the creator of Double Dragon and the Guilty Gear saga. On the other hand, Cavia was in charge of working on several Resident Evil deliveries.

An old story in a new light 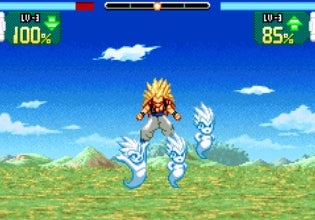 As for the story, the video game is based on the Dragon Ball franchise. In this installment, the player is taken through the sagas of Namek, Cell and Bu. The plot progresses in dialogue boxes after the fights. In addition, the gamer has the possibility of choosing between 16 players, each one of them with their own encounters and a personalized descent for their journey. Among them, 3 follow the original canon of the franchise. Furthermore, the other 13 are re-imaginations of what would have happened if the story had a different outcome.

The gameplay of the game is quite simple. Like FigtherZ (2018), one of the last games of the franchise, this title consists of two fighters facing each other in a 1vs1 duel that continues until one character exhausts the vitality bar of the other. Each one of them has their own characteristic skills very reminiscent for the fans of the saga. Also, with each fight or progress in story mode, the player has the possibility of both acquiring upgrades for their fighter and saving the points earned to unlock new ones.

The visual part of the game has very little change from the source material. Its creators decided not to take any risks and focused on making the characters look as similar as possible to the originals. But there were a few minor but remarkable creative decisions. Firstly, the opacity faithful to the style of the anime presented in the Dragon Ball Z saga faded to make room for more vivid colors that defined most of the Gameboy games. Also, the shadows took a much more prominent role, where they occupy much of the animated bodies of the combatants.

The sound, by contrast, took a totally different direction to what the fans were used to. With a much more frenetic music inherent to the most popular fighting games of the time, it was decided to abandon much of the original soundtrack during the clashes.

The critics agreed on mixed ratings. The greatest attention of the fanatics was deposited in the possibility of changing the original plot of the saga. Having so many hypothetical deviations in the story filled them with curiosity and gave the title a great value of repetition. In short, whether or not you are a fan of this universe, Dragon Ball Z: Supersonic Warriors is a great opportunity to enter an adventure that will never stop feeling fresh and will always be fun to relive.